A Sacramento, California homeowner noticed a wet area on the backside of the concrete deck of the pool they had recently built on a cliff. The homeowner contacted the builder and also called on two different professional leak detection companies to perform a full leak detection assessment. The goal of this process was to pinpoint the exact location of the leak as there were pipes in the area, but the concrete wall showed moisture.

The professional leak detection specialists had both ruled out any pool piping leaks with pressure testing. It seemed like they were at a dead-end, but the homeowner found LeakShot and contacted our office.

We spoke to the homeowner about the course of action to take. The homeowner decided to give LeakShot a try to repair the leak without having to take any invasive actions that could damage the brand-new pool.

The result: LeakShot sealed the location of the leak. Although there was no visible leak to be seen from inside the pool, LeakShot was able to locate the area and seal up the leak.  The homeowner called us and said the wet area on the backside of the pool disappeared and the water level in the pool has not dropped. 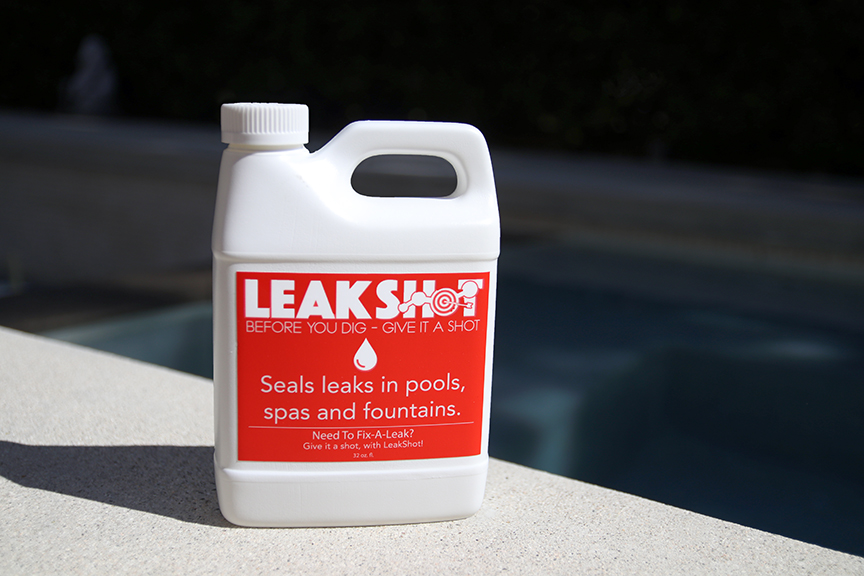 So how exactly did LeakShot repair this pesky leak? LeakShot is a fast-acting leak sealant that may be used to repair a variety of leaks in non-potable water-bearing containers. In less than a day, LeakShot can seal leaks in a range of conditions.  This liquid-based solution seals leaks in swimming pools composed of cement, fiberglass, vinyl, gunite, and other materials. One of the most appealing features of LeakShot is that it does not need customers to empty their pools before using it. Simply pour LeakShot into your pool and within a day or so, any small leaks will be shut.

Because the homeowner in question only had a little fracture in their pool, LeakShot was the perfect solution for the repair. There was no need to empty the pool, and the homeowner didn’t have to perform an invasive repair.

Are you in need of a major pool repair? Get in touch with the PipeFuze team today to learn more about how our line of products can effectively fix your major or minor swimming pool leak. Watch demonstration videos on our YouTube channel.